As Central High School looks to its 50th year on the Jacksboro Pike campus, the school’s age is really starting to show in the tired-looking library.

“It is something we started exploring in earnest,” said John Meade, CHS Foundation co-president, in advance of the preview party on Oct. 29. “We have looked at other revamped libraries at South-Doyle and Alcoa and we were inspired by what they did. Ours is outdated and needs to be transformed into a place where the students want to gather and make it a more functional learning space.”

Jim Hinton, of Cope Architecture, has brought the plan to life with his renderings. Just one of the exciting new features will be a coffee shop.

“It will have a Starbucks feel,” said Meade. “The students will run the coffee shop as part of a business class and it will be a more attractive location for students to study.”

Meade also pointed out that a new dedicated technology help desk will provide one-to-one help, charging stations will be integrated into the desks and the existing computer lab areas will be converted into a broadcast/recording lab, a multipurpose room and a maker’s lab. “It will be a learning space where the teacher can talk and lecture without interruptions,” he added.

“The fundraising has started,” said Meade. “Most likely we will have to do it in phases, maybe start with the coffee shop, then say for $50K we can do this, instead of raising one large figure.”

The bulk of the construction work should happen over the course of the summer.

Shortly after being appointed as the Director of the Pride of the Southland Marching Band, Dr. Don Ryder sat down and wrote out his goals for the program. Among those was to have a practice facility that was worthy of the storied tradition of the program. “I looked around the country and we truly had one of the worst situations you could find, particularly in the SEC,” said Dr. Ryder. “We were using a shared space, we were using a rented scissor lift that didn’t work half the time, and the AstroTurf field we were marching on was completely shot.”

Former Pride of the Southland trumpet player Tom Edwards (’72 Engineering) and his wife Elaine who have been steadfast supporters of the band for 43 years agreed with Dr. Ryder’s assessment. That’s when Tom picked up the phone and called his friend Dr. Wayne Davis who was serving as the Interim Chancellor. Three weeks later, an agreement was reached that would pull together resources from Student Life, Athletics, and a $1 million dollar commitment from Tom and Elaine to fund a new practice facility. Fellow Engineering alumnus John Tickle joined in to help fund a new observation tower as part of the project.

From that point, the project which had been discussed and debated for years now was on the fast track. “It was amazing to see how quickly things got going once Tom got involved”, reflected Dr. Ryder. “I give Wayne Davis, Tom Edwards, and Coach Fulmer a lot of credit for getting this done”.

Once the project was approved, architects with Cope Associates began the design work. Leading the team at Cope was Jim Hinton who played trombone in the Pride from 1991-1995. “When I saw the request for design services post to UT’s website I knew this was right up my alley and that we really wanted to be involved in this project,” said Hinton. “My connection to the program I think helped me understand exactly what they needed and what they were looking for.”

Construction was divided into two phases to minimize the disruption to rehearsals and the campus community as a whole. Phase I consisted of the construction of the new teaching tower which was completed last fall. The 36 foot structure features two observation balconies and offers the directors a perspective on practice that has been a game-changer. “I’m not sure the students like it because we can see things we just couldn’t before and we can make immediate corrections,” said Dr. Ryder. “There is nowhere to hide when we have the kind of view we do now.” 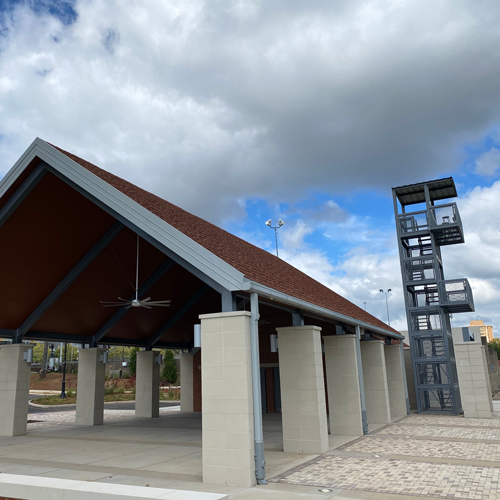 Phase 2 began after the 2019 season and was just completed this fall. This included the installation of a brand new artificial surface practice field and the construction of a 3,328 square foot multi-purpose building that features restroom facilities, climate-controlled storage, and a 2,100 square foot open-air pavilion.

The design that Hinton and his team put together checked all the boxes for Dr. Ryder. “I think they did a phenomenal job and I think it’s really special to have a Pride alum leading the project,” said Ryder.

The fact that he was designing a facility that would have such a major impact on the program that meant so much to him was not lost on Hinton. “Dr. Julian instilled in all of us that we should strive for excellence above everything. I knew how important the project was and I’m really proud how it turned out.”

Not only will the facility serve as the official home for the Pride, it also is an asset for the overall campus community. “We set out to create a complimentary design that fit well within the university’s collegiate gothic architecture while being functional and I think we achieved that goal,” said Hinton. “The entire campus community now has a really unique space that we hope gets a lot of use.”

While this fall is certainly not normal and the Pride isn’t breaking in the new facility as they normally would, it will be a tremendous asset for the program moving forward. “We have a place where the students can get out of the weather if we need to, they have restrooms, and we no longer have to haul equipment back and forth to the Music Building every day,” said Ryder. “We are thrilled with the way it turned out and we can’t thank the Edwards and the Tickle families enough for doing this for our students.”

Would you like to be part of an award-winning, growth-oriented architecture firm with an energetic and collaborative culture dedicated to personal and project success?

Our firm performs a wide range of project types for both private and public clients, including current renovations to Neyland Stadium and the recently constructed Stokely Family Residence Hall and Dining Facility at the University of Tennessee Knoxville, ongoing contracts with Oak Ridge National Laboratory, and many other exciting local and regional projects.  We are looking for talented individuals to complement our team.